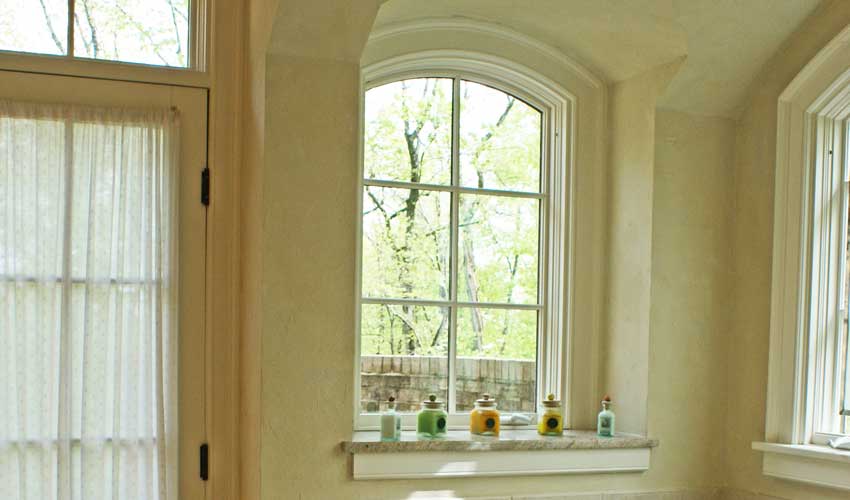 Early in the design process you will need to choose which window type suits your house and your desires. Windows are classified by how they open and close. And how they operate determines how they look. There are several window types to choose from. The primary types are double hung, single hung, casements, awnings, sliding windows, and fixed windows. They could be built of wood, metal, vinyl, or PVC. We’ll discuss the actual construction of the windows in the Window Material page. First, let’s look at each window type.

Double hung windows are one of the most common window types and suit a traditional style house. They consist of two sashes, one above the other. A “sash” is the name given to a frame with a piece of glass in it. These sashes are opened by sliding the lower sash up and the upper sash down. Double hung windows used to be built with cords or chains attached to weights hidden in the window frame. These weights counterbalanced the weight of the sash so the sash would stay open and not crash down shut. These days most double hung windows have a vinyl or metal track in the side of the frame that holds the sash open by friction. In many double hung windows, this track is designed to be pushed against the frame, releasing the sash, so it can be tilted inward to allow the outside of the window to be easily cleaned from the inside. This is a feature you may want. Many people do.

Casement windows suit both traditional and contemporary style house. They open like doors, hinged on one edge and the other edge moves outward. They are latched tightly when closed. When the latch is released, one side moves outward and a crank handle is used to push the window open further. Some manufacturers offer “traditional” casements with a hand latch and the window operates by simply pushing it out. Many of the casements with crank handles open in a way that allows you to reach out and clean the outside while standing on the inside. Be sure to check for this feature.

One special type of window is the French casement. These look like two casement windows side by side. The hinge side is the outer edge and they open out like a pair of doors. Of course, this can be done by placing two single casement windows together. But in that case, there would still be a vertical post between the openings. What is unique about the French casements is the fact that there is no vertical post. The opening is wide open between the two open sashes.

Awning windows are a window type that open like a casement window turned on its side. The sash is hinged on the top and the bottom edge moves outward. Awning windows offer a particular advantage over other windows in that they can be open in the rain and still keep the rain out.

Fixed windows do not open. Not all house windows need to be operable. If you live in a climate where air-conditioning is used extensively you may only need one or two windows in each room to be operable. Others could be fixed, inoperable types. Picture windows and other large windows, windows with unique shapes, or windows that are too high to reach are usually fixed. Fixed windows are often used as transoms above doors and other windows in rooms with high ceilings. Fixed windows offer two advantages over operable windows. They cost less and they are more weather tight and resist air infiltration better.

Arched top casement windows and double hung windows that are operable are available from many manufacturers. Naturally, these cost more. But the style of your house may require them. One thing to keep in mind when choosing curved or arch topped windows is how you will design your window treatment on the interior side. Arched windows can look very nice, but you will want shades or blinds on some of them, especially the bathroom windows.

Windows can be joined together to form many interesting designs. Plan these out carefully to determine which units in the arrangement will be operable, where the divisions between units will go, and how you will “dress” them with window treatments. You don’t want the division between units to be right at eye level. And you will want to control the sunlight and your privacy. Your architect, house designer, and even the window dealer can help you with those special arrangements.

Window Screens: There’s More to Consider than You Might Think