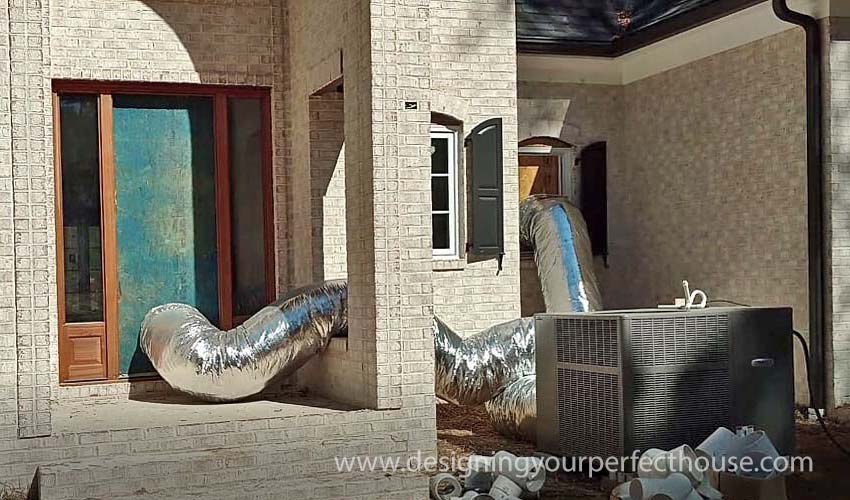 Water, water everywhere. Or more accurately stated, moisture, moisture everywhere. That pretty much describes the condition of houses while under construction. When we think of moisture, we usually think of water and not water vapor. But it’s water vapor, more commonly called relative humidity, that can play havoc in your home.

Water vapor is actual “grains” of moisture, too small to see, that are suspended in the air. And your new house has more of those grains than it should, especially during construction and even on through the first two years after completion of the construction.

Where does all this water vapor come from? It may seem a bit counterintuitive since a house is wide open to the air during most of the construction period, but the building process introduces gallons upon gallons of moisture to the house. Concrete has lots of water in it. The wood framing materials have much more moisture than they will once the house is heated and conditioned. Drywall spackling is loaded with water. And how many gallons of paint get applied in a new house? Lots.

Those many gallons of water cause wood to swell. If the moisture in the house is not reduced and controlled before the painting and finishing are done, wood flooring, baseboards, door and window trim, and even the framing itself will shrink excessively later. Warping, cracks, gaps, and other problems will crop up as the house “seeks” moisture stability. Worse than these unsightly wood movement problems, much of the excess moisture will get trapped in walls and ceilings, condense on cold surfaces, and provide a perfect environment for mold growth. Now you have an unhealthy house.

Get Moisture Out of the House

The solution is to prevent these problems by getting the moisture out of the house before the finishing happens. Remove the moisture before the house is occupied. The best way to do this is to start up the heating and air conditioning system as soon as you can.

However, running the HVAC system during construction can put a lot of strain on your new system and draw dust and debris into the ductwork. The better solution is to use a temporary heating and air conditioning system. I know a couple of excellent builders who do this routinely. They move their temporary system from project to project. If the humidity is high, they often will run a commercial dehumidifier along with the HVAC system. The target is to get the relative humidity inside the house below 50% if the outdoor air temperature is above 50 degrees Fahrenheit. 40% if the temperature is below 50°F.

After the humidity has been controlled for a while, have the builder check the moisture content in the wood floors and trim before doing the sanding and finishing. Your diligence will be rewarded with stable, flat floors that don’t gap and trim that does not shrink. And more important than that, you will greatly reduce your chances of growing mold within the walls.