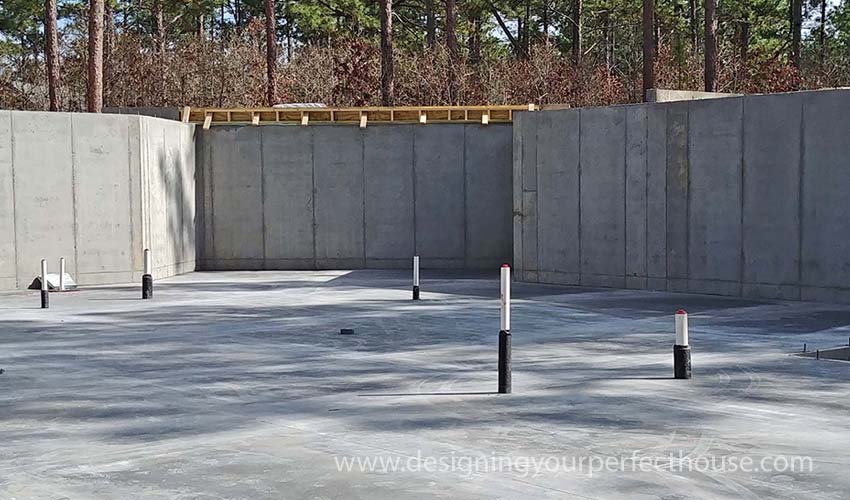 Good basement construction starts with solid, strong soils. Foundation and building footings must be placed on solid ground, or what’s called undisturbed soil. Undisturbed soil is soil that has been in place for thousands of years. No one has dug it up and filled it back in. It was compacted by Mother Nature with gravity over a long, long time. The soil particles have become tightly packed. Undisturbed soil will not compact under the weight of the house. That’s what you want when building a basement.

Your foundation should never settle. Settlement in a house is a misconception. You often hear people refer to settlement cracks in their house. They have doors that stick and drywall with cracks. They think their foundation has failed and believe this happened because the foundation has settled into the earth. It probably has not actually done that unless the basement construction was very badly designed and built or the soils were not inspected or tested before the footings were poured. Actual settlement, or soil subsidence can happen, especially in clay soils. But houses usually change shape for other reasons.

The reason new houses develop so called “settlement” cracks is because they actually shrink. The wood joists, rafters, sill plates, and even the studs the house that are the framing of the house will shrink as they lose moisture. The wood shrinks most in the direction perpendicular to the grain. The wood fibers move closer together as the moisture leaves. Studs don’t shrink much along their length since that direction is parallel to the grain of the wood. But the plates and sills that lie horizontally on the top and bottom of the studs, the floor joists, and the ceiling joists can shrink quite a lot.

I did a calculation once and was shocked to discover that a two-story frame house can shrink as much as two inches from top to bottom as the wood dries to its ultimate moisture content. Drywall, doors, windows, and other house components do not shrink that much. Because of the differential shrinkage, you end up with sticky doors and drywall cracks. You get gaps at mouldings and in floors. These cracks will grow and shrink seasonally. But after the first winter heating season, things should stabilize. Once that happens, you can patch things up. Most of them will not return, if your house was built right. 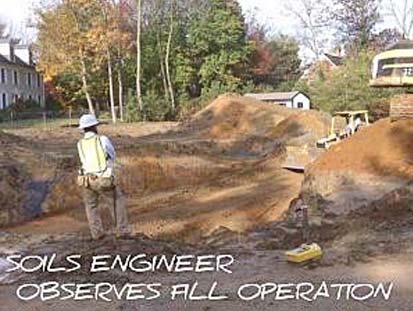 Sorry for the diversion. Now back to our discussion of basement construction. If your house is built on solid soil, you will not get any settlement of the foundation or basement walls. If you are building in an area that you know or suspect has poor soil or unsuitable soils, you will need the advice of a soils engineer, more properly called a geotechnical engineer.

He or she will test your soils and prescribe what must be done to make the soils strong enough to support your house for a long, long time. It might require removal and replacement of the bad soil. It might mean draining and compacting wet soils. But whatever you have to do, when the amendment of the soil is complete, be sure to have the engineer retest and certify that the soils are now good for construction.

Basement construction can be done with concrete block, poured concrete, pre-cast concrete, or even treated wood. I have not built a basement with treated wood walls and cannot comment on their benefits or shortcomings. But the International Residential Code has requirements and details about this type of construction.

Precast concrete foundation systems can save money by reducing on-site costs. This type of basement construction uses factory-made concrete panels that are shipped to the site and assembled on site-built footings. Many times, the footings are actually trenches filled with gravel and not poured concrete. The cost savings with this system come from the elimination of the need to build concrete forms and then strip away the forms and transport them off-site. But usually those benefits are not significant for a “one of a kind” house. In houses that are built repetitively in a subdivision, there is an economy of scale with precast concrete foundations that can save both time and money that is multiplied over many houses. 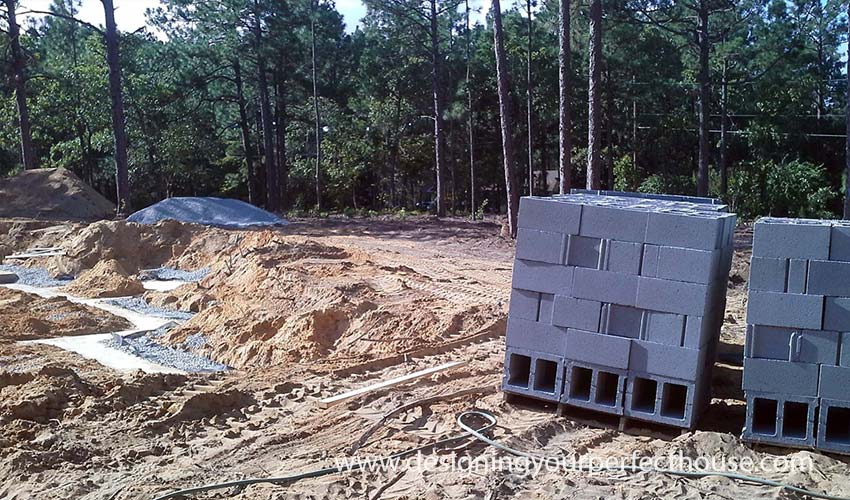 Precast concrete basement construction is quite strong. But this foundation system is not as commonly used as poured concrete or concrete block. If you’re buying a house with this type of foundation, you do not have to worry about that. Just be sure to get documented engineering certification on the design. It will give you peace of mind and also reassure a future buyer of the integrity of the basement and house foundation.

Basement construction with concrete block is quite common. It will produce a strong basement in most locales. Concrete block tends to be the most economical way to build a basement. You’ll have many more concrete block masons to bid the job than sub-contractors who can do poured concrete basement construction. The competition tends to produce lower prices. However, concrete block, even if reinforced, is not appropriate for areas that have expansive soil, such as many types of clay. That’s soil that swells a lot when it gets wet and shrinks when it dries. The swelling of this soil will apply lateral loads (pressures) to your basement wall (push on it sideways) and can actually cause the basement construction to crack and fail. If this is your soil type, you’ll need reinforced concrete basement walls. Again, the local Building Code or a geotechnical or soils engineer can help you determine this. 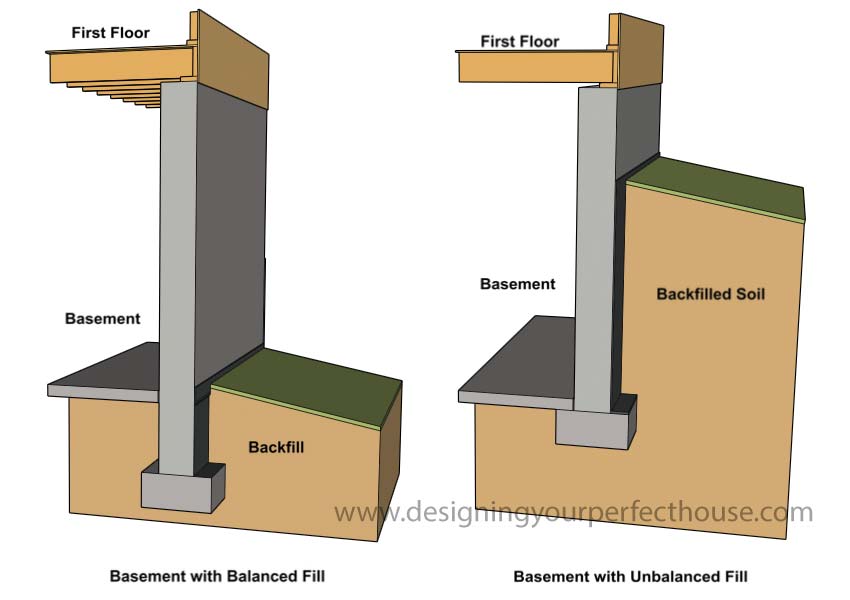 Although not as strong as reinforced concrete basement construction, concrete block basements are absolutely strong enough to support a house and can be reinforced to make them even stronger if your site conditions require it. The amount of reinforcement you need will depend on the amount of soil your basement walls will hold back. A structural engineer can advise you on the exact way to do this. But here are some basic guidelines.

If the level of the soil outside your basement (it’s called the finished grade) is higher than your basement floor, you are said to have an “unbalanced backfill” condition If the height of the unbalanced backfill is less than four feet, your basement construction can be done with a simple unreinforced, 8” block wall. If the unbalanced backfill is up to five feet, you’ll need a 12” block wall. If it’s up to six feet, you’ll need a 12” concrete block wall that is filled solid with grout or built with solid block units. If the unbalanced fill is higher than that, you will need additional steel reinforcing. Remember, these are merely rough rules of thumb. Your local Building Code can give you specific requirements for basement construction in your location. It’s always a good idea to consult with a structural engineer to make sure your foundation and basement are structurally sound and comply with the Building Codes.

For areas with expansive soils and if your house will have an unbalanced fill condition above six feet, reinforced concrete basement construction would be best. This is the most expensive option. But consider how much you are investing in the construction of your house. It is probably a prudent investment to make sure your house foundation will perform as intended and not require expensive repairs in the future. A structural engineer is necessary for the design of a reinforced poured concrete foundation.

Reinforced poured concrete basement construction is a multiple step operation. First, forms are erected according to the structural or architectural plans. Next, reinforcing steel bars are assembled within the forms and tied together. When that is completed, concrete is poured into the forms.

There is one aspect of poured concrete basement construction that actually offsets some of the additional cost. Concrete foundations can be built very quickly, sometimes in as little as a week. This speeds up the construction schedule. Rain and foul weather can delay progress on a concrete block basement. The time savings converts to money savings you’ll see in site supervision costs and construction financing.

One additional benefit of poured concrete basement construction is that concrete walls are intrinsically much more resistant to water infiltration than concrete block walls. You still should waterproof the basement walls properly. But the added water-tightness of poured concrete will give you a second line of defense against damaging water intrusion.

That’s how you build a strong basement. Next you want to make sure it’s a Waterproof Basement.