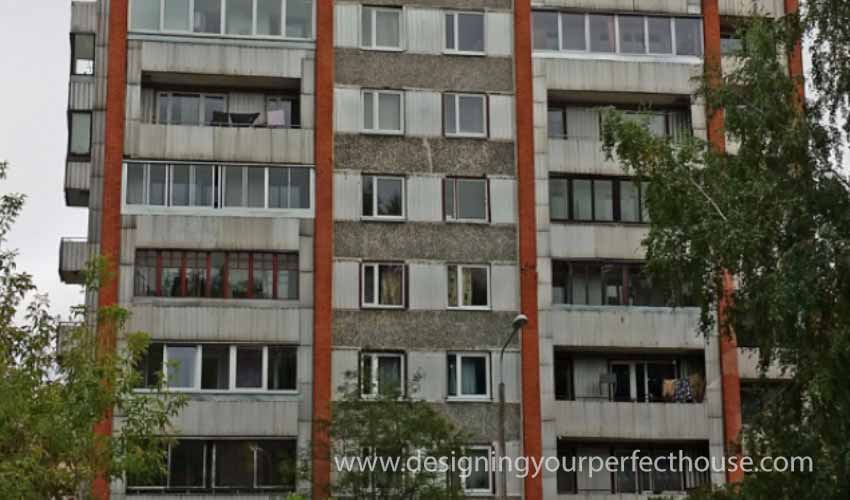 Latvia is a country with an attractive and culturally integrated architectural history. The buildings of the past reflect the true character of the Latvian people, their traditions, and the environment around them. The capital, Riga, contains the largest collection of Art Nouveau buildings in the world and has been said to be the largest wooden city, as well. Wood is an abundant resource in Latvia and the architecture, with its fine woodworking details reflects it.

Unfortunately, the continuance of the development of Latvian architecture ran into a major obstacle during most of the twentieth century. During the oppressive Soviet occupation, aesthetics suffered along with the people.

“Here’s a Typical Soviet-Era Housing Project in Latvia. This is Right in the Neighborhood of Fine, Traditional Latvian Houses I Have Been Showing You in Other Blog Posts>>. Which Would You Prefer to Live In?“

Soviet architecture took over. It was mandated by the government. How something looked and felt was no longer important. With Communism, everything is owned by everyone. But no one has any incentive to make things better. The quality of life spirals downward and the architecture reflects it.

Buildings were slapped together, usually without insulation, despite the cold climate. Details that might be pleasing to the eye and soul were promptly omitted. Every cost-saving corner was cut. Hideous, inhuman buildings were “designed” and erected. Then the people were crammed inside. While this was happening, the Soviet Union was bragging to the world, though their propaganda outlets, that major progress was being made. They claimed that Communism was making a better, and equal, life for everyone. However, the Latvian people knew the true story of socialism and communism.

There was some perverse truth to the claims of the Party’s propaganda machine. Life was becoming more equal for most of the population. They were rapidly becoming equally impoverished. The struggle to eat and stay warm was the same for most…unless you were a powerful person in the government. Only then did you have luxuries like heat and some fresh food. And if any person were to whisper a word of complaint or express a thought deemed to be against the government, they would be scooped up and sent far away, never to return. These things actually happened to members of my clients’ families.

It all sounds like fiction to those of us who are privileged to live in the reasonably free western world. But we need to learn lessons from what has happened in the past in places like Latvia. It disturbs me every time I see us voluntarily vote for laws that limit our personal freedom and place our so-called welfare in the hands of the government with the false impression that this will improve our lives and the lives of our fellow citizens. Just look at the recent past in places like the former Soviet Union and you will see that this is a very bad road to travel.

Be sure to read the other posts in the Latvia series: