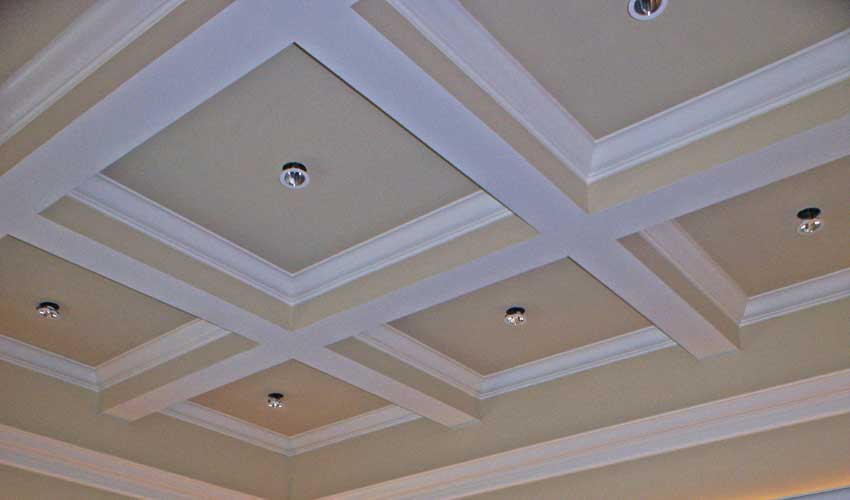 I recently was asked a question from a person in Philadelphia about how to deal with a very high ceiling in a living room. Here’s the question:

My nineteen-eighties condo has a 19′ ceiling in the living room that merges with the dining area where the ceiling drops to eight feet. The 19′ fireplace wall is in the corner. Is there any way to make the scale of this 19′ tall room more human? I have purchased numerous original oil paintings that go almost to the ceiling on the wall opposite the French doors. I’m beginning to question this technique. I feel there is so much wasted space that I wanted to make it interesting rather than just filled with air.

Your dilemma with the high ceiling is one that we often face when there is a second floor overlook or balcony into a living room or great room. I can see that you have an appreciation for this problem already.

This is not a new problem. Back in the days before air conditioning in houses, the ceilings in high end houses were often quite high to keep the room cooler in summer. Check out the George Read house on The Strand in New Castle, Delaware for an example. Hot air rises, after all. So they had to deal with this same issue. The solution you will sometimes see is to add a cornice type of moulding part way up the wall, maybe at the 9′ or 10′ level, paint the wall color up to that and then paint the ceiling color on the upper portion of the wall as well as on the ceiling. This would be a trick of the eye that would give the impression of a lower room because your eye and brain would tend to only perceive the color portion of the wall while the ceiling color portion would sort of vanish into the ceiling itself. This trick actually works.

On one house I designed we had to have a two story room because the owners wanted a music loft to overlook the room below. But we also wanted to control the visual height of the room. The room was about 20′ tall with windows on one wall toward the view. I designed an oversized cornice, kind of like a big mantel shelf, that I ran all the way around the room. It projected out from the wall maybe ten inches and was about fourteen inches tall. It was like a very big plate rail. I placed it about thirteen feet above the floor. The wall below the cornice was painted a color, not white. The wall above the cornice was painted a much lighter version of the wall color. Then there was another crown moulding where the wall met the ceiling. The ceiling was given more color to help bring it down. This worked pretty well. The cornice added a strong horizontal line that helped elongate the room. It’s sort of the same principle that applies when you wear horizontal striped clothing. It makes you look wider and shorter, although that’s not an effect most of us want.

The whole idea is to give your eye a place to stop at the height you select. Although I can’t think of an example off the top of my head of a ready example, I’m sure you can walk around Philadelphia, or any other city, and see a number of buildings that have a cornice line up a story or two, visually defining a height that relates to the people on the street. But then the building continues up many more stories. This is the same principle being used to control the visual height.

I find that fewer and fewer of my clients want the really tall ceilings. Once they have lived with them, they see the down side. If a tall ceilinged room opens to the second floor, sound transmission can be another problem with sounds reflecting off the walls and echoing from one floor to another. Today’s trend seems to be a return to more human scaled rooms.