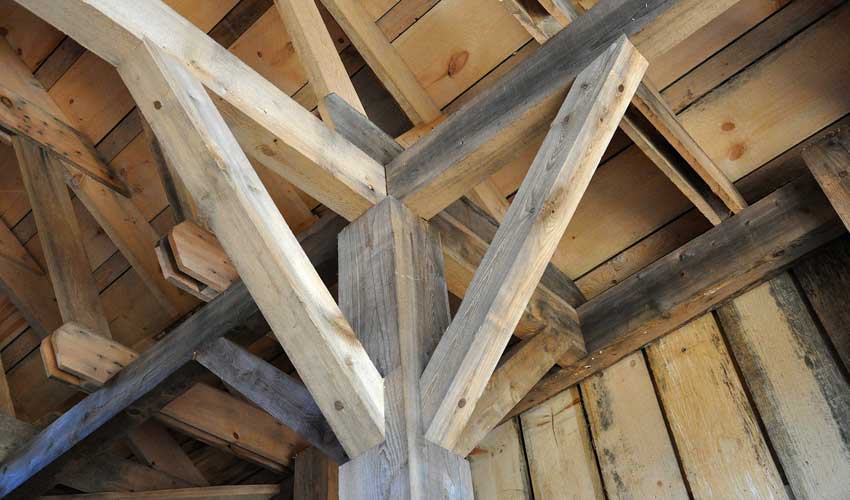 Antique beams are just one of those “old” items. Sure, it is possible, and might be easier, to buy new, heavy wood beams. These are usually Douglas Fir, since that seems to be the only species of tree that is big enough to yield long, straight wood that is large enough for beams these days. But what you buy will be fresh from the saw mill and look new, even if you specify they be rough sawn. They’ll be nice, but they won’t be the kind of gems true antique beams can be. New beams can be “distressed” by beating them with chains and such. But they can’t match the rich patina and beauty of true reclaimed antique beams.

Antique beams come from old buildings that are being torn down. They are from buildings that have outlived their usefulness. There is a big difference between sawn and hand-hewn beams. If you want the really rugged look for your antique beams, you’ll probably need to buy them in the northeast. The countrysides of Pennsylvania, New York and the New England states are dotted with barns that are leaning or falling down. They have become hazards. The owners of these barns find a building materials salvager to come in and safely take the barns apart. The salvager gets the wood to add to his inventory of beams. And the property owner gets rid of a liability before it falls down and kills somebody. This is when your fun begins.

To find these antique beams, you’ll need to take a ride to the salvager’s yard and pick out what you want. One of my favorite building materials salvager is Sylvan Brandt in Lititz, Pennsylvania. If you go there, be sure to tell them I suggested you drop by. Say “Hi” to Dean Brandt for me. Be sure to know your room sizes and allow a little extra length at each end. At the salvager’s yard, you will not find a nice neat stack of beams ready for you to ship to your new home. What you will find is what looks like a pile of firewood. But don’t light a match. You will be looking at building salvage gold. This will be a pile of oak and chestnut beams that are hundreds of years old. These beams were hewn from logs by hand. Men used a tool called an adze, a sort of hatchet with the blade turned sideways, to shape the beams. On some beams, you might find that only one side of the beam was flattened and the rest of the beam is still shaped like a tree trunk. It might even still have bark! Others will have rectangular holes carved out of them where other smaller beams used to join them. You will probably find a few wood pegs still in place. This is character that cannot be reproduced.

What you do next is to paw through the pile of beams, with the salvager’s help since they are very heavy, and select the antique beams you want. Look for beams that are similar in width and thickness so they will look logical in your house. You want them to look like they are truly a part of the structure of your house. Check the ends for rot. Sometimes, part of the beam has to be cut off if it is decayed beyond use.

When you get your antique beams delivered, you will probably need to fumigate them before installing them. There is a high likelihood insects have taken up residence inside of that tasty oak or chestnut. You don’t want them moving into your house with you. Cleaning is another question. Depending on your tastes, you may want the beams lightly brushed off to remove debris and nothing more. Or you may want them cleaned much more. I would suggest simply using a bristle brush and maybe some clear water to clean your antique beams. Otherwise, you will remove the very character you wanted in the first place. The beams can be left the weathered silver grey they probably will be. Or, you can stain them a tone you prefer.

Once you have your antique beams installed as a part of your house, you will have an irreplaceable treasure. Your new house will have a unique connection with the people who cut the wood, shaped it, and assembled it so long ago. You’ll have a link to a time forgotten. Antique beams lend a wonderful nostalgic touch to any home