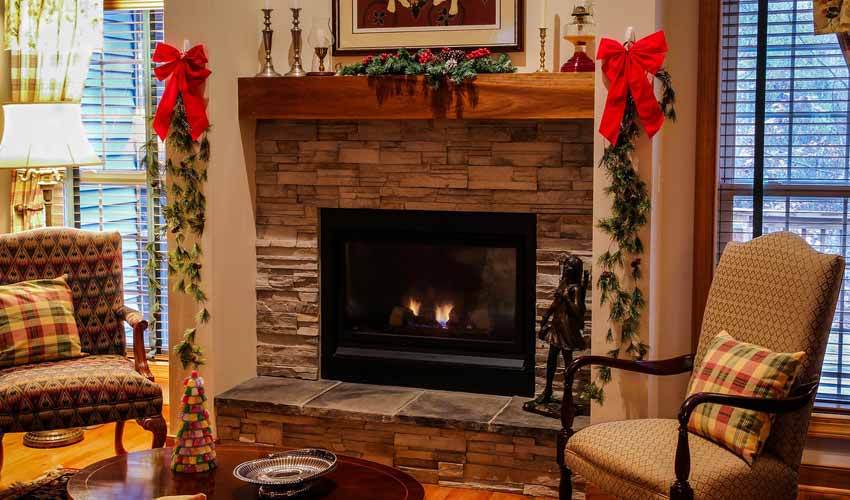 A nice fire in a fireplace is a great way to warm up your house in the winter. Right?

That would seem logical. After all, when you sit by the fire, you get warmed up. But sometimes what seems logical is not really logical, at all. Let me help you separate fireplace fact from fireplace fiction.

You might think fireplaces offer an available (and renewable) source of fuel and they are easy to use. But the fact is they actually take more heat out of your house than they add. The reason this happens is because hot air rises. I’ll explain.

When you light your fireplace, you want the fireplace and chimney to “draw” well. You want the smoke to go up the chimney so the house will not fill up with smoke and asphyxiate (kill by suffocation) the inhabitants. In order for the smoke and hot air to go up the chimney, fresh air needs to enter the house from somewhere to replace it. The air must flow, just like water does. It’s physics. Because the hot air is much less dense (lighter) than the room air, it rises with some pressure and actually sucks air in behind it. The air that comes into the house to replace it is known in the Heating and Air Conditioning world as “make-up air.” It makes up for the air that went up the chimney.

Now think about where the make-up air comes from? It gets sucked into the house through every crack and crevice it can find. It comes in through cracks around windows and doors. It comes in through the vents in your bathroom, dryer, and kitchen hood where the air is supposed to go out. It comes in through a million little cracks most houses have around electrical outlets, under baseboards, and around recessed light fixtures in the ceiling. In fact, the average house has enough cracks and gaps to equal the area of a completely open window! That’s amazing, but true.

Now back to the fireplace. When you have a good hot fire going, you have created a convention current of air that rises up your chimney with some significant power. It is stronger than an exhaust fan. The result air movement is that instead of the fire in your fireplace working to heat your house, it really is working like a giant exhaust fan that is ventilating your house. That’s probably the last thing you want on a cold winter day.

I’m not saying that a cozy fire is not a great thing to sit by when the snow is falling. But just realize that it is a poor way to actually heat your house.

If you want a fire AND some energy efficiency, take a look at some of the better “Direct-Vent” gas fireplaces on the market. The best of these types of units will give you the look and heat of a real fire, but they won’t suck the heat out of your house in the process.

Do You Have Hot and Cold Bedrooms?