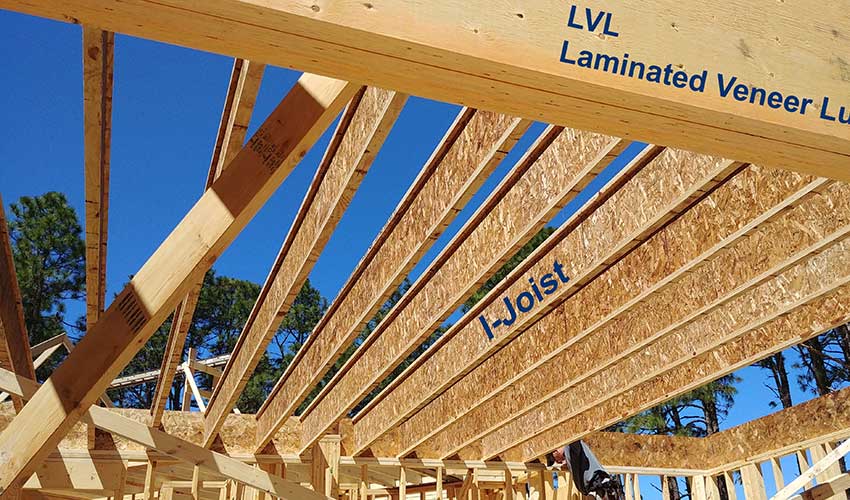 Studs? Joists? Rafters? I-Joists?  When an architect and builder sit down to discuss the plans for a building, they speak a common language.  Sometimes I forget that the terms those of us in the construction industry use are not common words used by most people. It can be embarrassing for a “non-construction” person to keep asking what every third word means. It would be worth taking a few minutes to familiarize yourself with some of them so you can join in the discussion.

Let’s look at a few words that relate to the framing of the house.

Dimensional Lumber and Engineered Lumber are designations of types of lumber commonly used.

When a house is being framed, it might look like a bunch of sticks put together in the general form of a house. But each piece has a name and a purpose. In years past, the traditional type of wood used for framing was Dimensional Lumber This is the solid pieces of pine, spruce, hemlock, or other species cut into nominal sizes of 2”x4” on up to 2”x12.” The smaller 2×4’s and 2×6’s are still the predominate wood product used for walls. Those pieces are known as Studs.

The large sizes of dimensional lumber, 2×8’s and 2×10’s, had been the standard material for floors and roofs. But great advances have been made in the production of Engineered Lumber, i.e. lumber made of thin wood sheets and random sized wood strips bonded together with strong resins and adhesives. It is now widely used in the form of Plywood (the original engineered lumber product), Oriented Strand Board (OSB), I-Joists, and Laminated Veneer Lumber (LVL) for those building components.

Joists are pieces of dimensional lumber or engineered lumber set horizontally and on edge to become the structural framing for a flat platform such as a floor or ceiling.  Lumber set on edge but at a slope to frame the roof of the house are called Rafters. Engineered lumber is being used for rafters more and more.

Engineered lumber has several advantages over dimensional lumber. It is stronger and can be made to be much longer in length. It does not shrink like dimensional lumber can. It can be fabricated to be deeper (vertical dimension) to allow more room in floor cavities for insulation and mechanical systems. And it allows maximum use of lumber resources by making use of even the fragments of lumber that used to be discarded by the lumber mills.

An I-joist is made from Engineered Lumber with a piece of LVL lumber along the top and bottom edge and a vertical piece of OSB panel set vertically between the two. It resembles the letter “I” in cross section like a steel I-beam.

Check out my Glossary of Architectural Terms for these definitions and other mystifying words you hear tossed about by your builder and architect to become a savvy, informed client and customer.

Turret: Word of the Week